From Hackerspace Amersfoort
< Projects(Redirected from Ethernet over phone cable)
Jump to: navigation, search

Recently I upgraded my internet connection, from a 4 mbit down/1 mbit up ADSL connection to a 50 mbit up/down fiber connection (including phone service), which is really great. However, I was then faced with a common problem, how to get a network connection from the router, which was installed near the fuse box, to my computer.

When I was still using ADSL, I had a DSL splitter connected to the phoneline (which enters the house at the same place as the optical fiber cable), from which a phone cable runs to the phone, and another phone cable to the room where the computer is, with the ADSL modem connected there, and a network cable connecting the computer to the ADSL modem.

But with the fiber connection, the router was in the place where the DSL splitter used to be. For the phone this didn't matter, I simply plugged the phone cable into the router and it worked.
However connecting my desktop pc to the internet was going to be a little more difficult, running a network cable through the house was going to be a big pain in the ass. I tried running 100 mbit ethernet over the 15 meter long phone cable, but unsurprisingly it didn't work at all.
I tried wifi instead, but it turned out to be slower than the 50 mbit internet connection (to be fair I only tried 2x2 802.11n over 2.4 GHz).

If only there was a way I could use the existing phone cable........

And then I thought about homeplugs, if those things can manage to get a reasonable amount of data over the mains wiring, surely they must work absolutely wonderful over a phone cable.
So I decided to try it out, and bought a set of TP-Link TL-PA511 homeplug adapters. 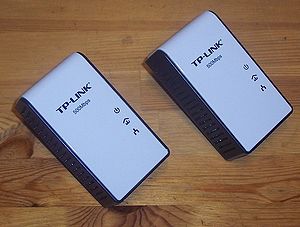 The homeplug adapters can be powered with 100 to 240 volts AC, I wasn't about to connect the mains wiring to the phone cable, but luckily I had a 30 VA 230 to 115 volts transformer to power the homeplugs, and a housing of computer power supply to put the transformer in. The power supply's connector has a netfilter built in, which helps to block high frequency interference from the mains, although I doubt that those frequencies are passed by the transformer. The transformer is protected by a 160 mA fuse in series with the primary winding (white fuseholder with red wires), and the phoneline and homeplugs are protected by a 125 mA fuse in series with the secondary winding of the transformer (black panel mount fuseholder on the right). 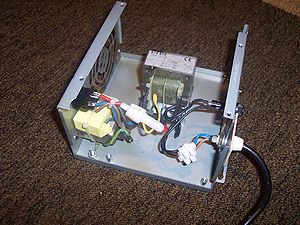 I connected a power socket to the transformer, and a piece of phone cable with a ferrite bead to reduce high frequency interference, the ferrite bead acts as a common mode choke, which passes differential currents but blocks the common mode. Inside the power socket I connected too 100µH inductors in series with the wires connected to the transformer, to filter high frequencies, however it also worked fine without the inductors, and I suspect that these have too much parasitic capacitance to do any good filtering. 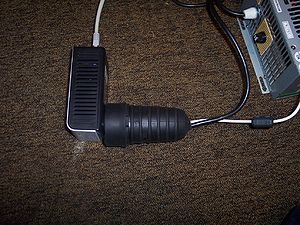 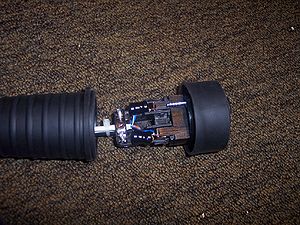 I used a pair of T-connectors to connect the homeplug adapter to the existing phone cable in the house. 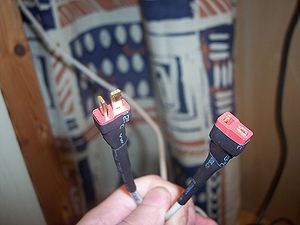 This is the complete setup at the computer side: 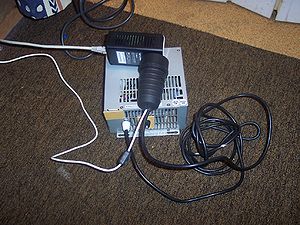 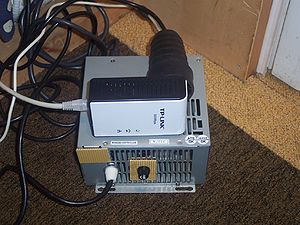 Near the router, the other homeplug is connected to the phoneline in the same way, using a piece of phone wire with a ferrite bead and T-connectors. 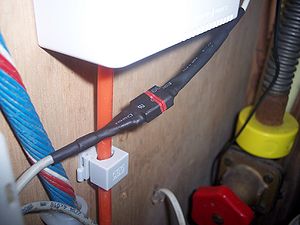 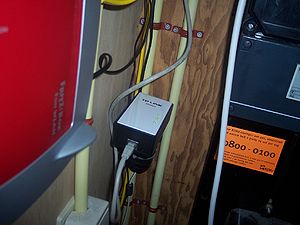 I connected one homeplug to my desktop machine, and the other to my notebook (both are capable of gigabit ethernet) and checked the connection speed with the TL-PA511 Powerline Utility. It said 504 mbit, which I assume is the maximum. 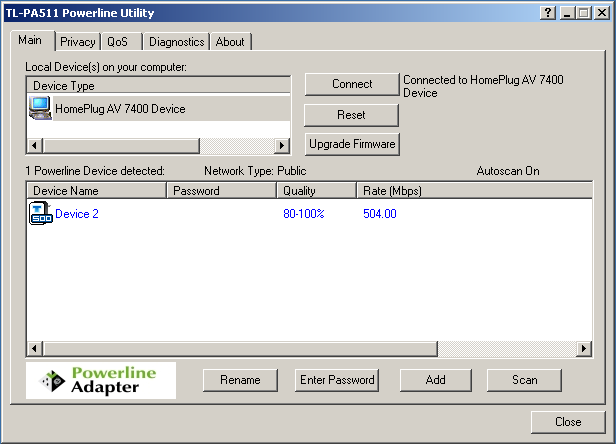 The average ping is a little over 2 milliseconds, pretty low but not as low as ethernet. 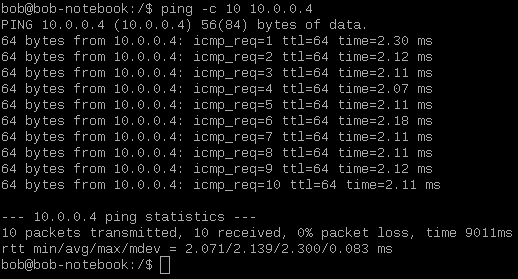 I ran two bidirectional tests with iperf, an individual and a simultaneous one.

Wow! Over 220 mbit individually and the simultaneous test reached almost 240 mbit combined, I did not expect it to work this good.