The LED-Pad is a simple remote control intended to be used with single color LED-strips.

The color and brightness can be controlled via an analog joystick and a user interface on a 160x80 OLED display. The display shows a HSV color spectrum with both gradients to dark and light colors. To select a new color, move the cursor with the joystick to the desired color. 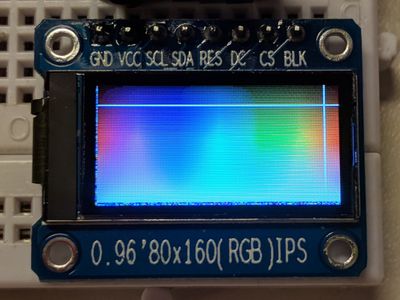 The selected color is transmitted to a pre-configured MQTT server which is connected to via WiFi. The MQTT message payload is a hex string of the currently selected RGB color.

The heart of the LED-Pad is an ESP8266, an MCU with a WiFi transceiver on board.

The joystick used is from Sparkfun and has two potentiometers to signal the current position of the stick for each respective axis.

The joystick's button is hooked up to a digital pin which is configured as an input with internal pullup.